We are Fascinated and Frightened by Curiosity. Why?

by Leadership&Co | BUSINESS LEADERS (ALL) 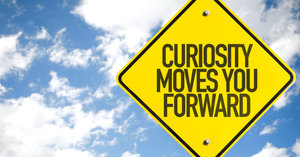 On a recent flight, the passenger next to me struck up a conversation—less common these days as people are quick to pop-in headphones and tune everyone else out. He turned out to be an interesting guy who was intrigued by my line of work, so it was a welcome change. As I described Leadership & Company and shared our thoughts on curiosity in the workplace, he got pretty animated. “I couldn’t agree more!” he said excitedly. “I’ve always thought those who dig a little deeper or ask a few more questions—they’re the ones who get ahead.” Then he added, “You just don’t want your people getting too curious.”

We’ve discussed curiosity with many business and thought leaders over the past year, and the topic clearly resonates. Employees identify curiosity as a trait they value in companies where they work, and leaders rank curiosity as a highly desirable trait in their people. But when it comes to actually creating space for greater exploration, these same people hedge. What is everyone so afraid of?

As much as we like the idea of building a curious culture and desire the innovation and continuous improvement it brings, there’s a pervasive fear that encouraging “too much” curiosity in the workplace can distract employees and ultimately, slow down business and make it harder to manage. While fascinated by the idea of people exploring more and investigating further, leaders we’ve talked to are skeptical that they can do this and maintain a high level of productivity. While readily acknowledging that we’re in an age of innovation and disruption, these same leaders quickly remind us that they’re still accountable for targets tied to efficiency and productivity. Specifically, two questions continue to surface:

The answer to both questions is, unequivocally, yes. But productively channeling curiosity requires a thoughtful approach.

The quality of our decisions is heavily dependent on the quality of our inputs. “Garbage in, garbage out” isn’t just a trite expression—it’s a fundamental truth about decision-making. And to get to better inputs, we need to be curious about other perspectives—and the role bias plays in shaping our views, and the views of others.

Unfortunately, the term “collaboration” has become code for “more meetings” in many companies. Instead of simply meeting more, curious leaders ground their efforts to gather better inputs by being thoughtful about their network of connections, and by asking really good questions, such as:

Think of a leader who solicits diversity of thought and opinion from a broad network of connections, scans for bias in their own thinking and the thinking of others, and consistently asks good questions, and I’ll show you an effective collaborator.

A friend who works in finance for a well-known coffee and sandwich chain was recently stumped by the superior performance of a particular store in London. She’d analyzed the usual suspects—store location, hours of operation, employee engagement and turnover—but it wasn’t noticeably different from nearby stores. She was confounded. And relentless.

Despite suggestions to move on, she called up the the store’s manager and peppered him with questions. As they talked, she learned the store had an unusual staffing arrangement—a dedicated barista. In other stores, all employees were trained to run the espresso machine as needed. When she asked the manager why he’d made this decision, he was blunt: “How else do I keep the espresso machine from breaking down?”

It turns out, maintaining an espresso machine is a bit of work, and having a full-time barista ensured it was cleaned properly, resulting in far fewer breakdowns and more premium coffee sales. This manager’s decision was the small tweak that drove the store’s outlier performance, and resulted in a full-time barista role being implemented at the rest of the company’s stores. This was only discovered because a leader (in finance!) used her relentless curiosity to investigate further.

Persistent investigation is the hallmark of curious leaders. They aren’t just thinkers; they’re structured investigators. They are less interested in being right, and more interested in finding the right answer. They are curious about the root cause of problems and ask “why?”, often when others don’t. And they like to explore creative solutions to complex problems.

Better inputs clearly matter, but effective investigators understand that identifying the right problems to solve, analyzing them thoroughly, and searching for creative solutions is critical for better outputs, too.

“When you’re trying to get people to buy into your idea, is it more important to have the best solution on the table or to be the most influential person at the table?”

I’d ask business leaders that question when I taught for CEB’s Leadership Academies, and typically, a debate would ensue: most would argue that having the best idea is all that matters, and a few voices would counter that how you sell is more important than what you sell. The truth is both matter.

Curious leaders don’t just seek better inputs and outputs—they strive for better outcomes by effectively persuading their audience. Whether pitching an idea to a business leader or getting a team on board with an impactful change, effective persuasion requires appealing to your audience’s heads and the hearts by considering the following questions:

Better inputs matter, as does our ability to think critically and investigate thoroughly. But generating the most innovative ideas does us no good if we can’t get key decision-makers or influencers on board, and quickly.

In the end, I’m not sure my affable seat mate on the plane was all that frightened of curiosity. When he said, “You don’t want them getting too curious,” I think he was expressing a valid concern about unbridled, unfocused exploration. Put another way, curiosity isn’t the problem—it’s how people explore. And that’s where a thoughtful approach that channels curiosity through effective collaboration, critical thinking, and persuasion is key.

Embracing curiosity in the workplace is a classic win-win: employees crave permission and space to explore more, and companies stand to benefit from greater exploration. While it requires thoughtful planning and intentional work, the benefits—better inputs, outputs, and outcomes—are well worth it.